I said to another Blogging from the Heart-er last week, it amazes me the overlaps and similarities we find among us.   Not only the heartbreaks, losses, and celebrations that mark the passage of time, but also the quirky things like a shared desire to be in a flash mob or to play the ukelele.   In that spirit, I’m revealing a few oddities today.

2.  I have selective fear of heights.  LOVE flying, hot air ballooning, helicopters, looking out at panoramas from high buildings.  But, I have to steel myself to climb down bleachers, ladders, or rocks.

3.  I loved ice skating for fun when I was in high school and college, but never could figure out how to skate backward.  Not once.  It was as though turning around short-circuited the messages between my brain and my legs.

4.  I won a Corvette on Wheel of Fortune many years back.  (I sold it as soon as I took possession; too much money tied up in a car for my comfort.)

5.  My love of my life who passed in ’09 was also the first boy I ever kissed back in school.  We re-connected after thirty years.  Once, in a late night conversation he said to me, “So, I was your first kiss.  Wouldn’t it be something if you were my last?”  I took it as a statement of  willingness to become more deeply involved.  It never occurred to me to think of it as a sign of impending doom.

7.  At some point in my life I would like to teach English in Spain for a year.  Mostly because I’d like to become fluent in Spanish myself.

8.  I LOVE color, yet my favorite flowers are white.  White tulips for looks, and gardenias for scent.  And actually add in pink or red camellias because they remind me of my mom.

9.  I was not picked for the school choir after auditioning in fifth grade.  I did get in for sixth grade.  No matter how many people told the adult me that I have a beautiful voice, I carried around that ‘not good enough’ fifth grade verdict.  It’s just been the last few years that I’ve really let myself feel comfortable singing in front of others.

10.  I finger knit.  A right-handed friend once tried to teach (left-handed) me to knit.  You know, the normal way, with needles.  I ended up sticking the right needle on my right thigh and working around it with my left needle.  My entire knitting career lasted two rows.  Then last year I saw this and was hooked.

I guess we’ve all got our quirks!

When my great nephew was little and he was cold he would snuggle up to me and say, “Auntie, can I have some of your warm?”  So I will leave you with…

Some of my warm, 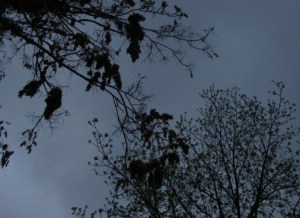 Just a quick post today; not digging too deep.

It’s a cold, wet, dark, rainy day here in sunny Southern California.  A day an old boss of mine used to call a “Hot Chocolate and Monopoly Day.”  Native Southern Californian though I am, I do like a good rainstorm so I’m reveling in it as its likely winter’s last hurrah.  We haven’t had enough rainy days this year.  Maybe it’s because I’m a January baby, but I need the cocooning, being blanketed by the cloud cover as well as cozy real blankets as time to re-charge.  Mind you, I’m pretty sure that endless weeks of grey would prey on my psyche with not so good results, but for today I’m savoring the wind and the rain and the cleansing it will leave in its wake.

No takers on yesterday’s quiz?

Can you tell what common household item this is? Bonus points for getting the connection to this post. Answers tomorrow!

Ok, this was a tease but also a little exercise in perspective for me.  You’re looking at a close up of the beater from a hand mixer.  The illusion is that the stripes are all convex, when in fact you’re looking straight through so every other one is concave.

So, the connection to yesterday’s post…are they in or out? 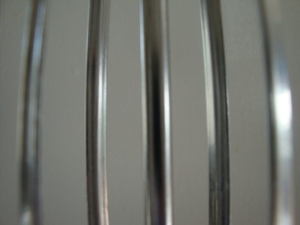 Can you tell what common household item this is? Bonus points for getting the connection to this post. Answers tomorrow!

Someone told me the other day they’d gotten a group text asking the recipients for a response regarding the evening’s event.  Are you in or out?

The question has hung in my head.  Easy enough to respond when a few hours investment is all that’s at stake, but what if we up the ante?  A friendship, a relationship?  Are you in or out?  How did your process around answering change?  How about a job, your career?  Are you in or out?  For how long?  I love the title of Seth Godin’s book, “The Dip — a Little Book that Teaches You When to Quit (and When to Stick).”

I’ve appreciated the options in my life but sometimes I think there are just Too. Many. Choices.  When I thought I was marrying I knew I’d never be able to choose just one china pattern.  I’d collaborated with my love on creating a vision for our dining room table of complementary colors and patterns of vintage dishes, silver, and glassware.  Heck, I was stunned I’d found The One Man I knew I could stick with forever.  Don’t ask me to carry that through to the dishes!

What I’m really talking about here but what’s difficult to spit out is that Are you in or out? is the million dollar question.  It’s our ultimate choice about life and how we live it.  Early in grief I couldn’t help but feel I would have been just as happy to have gone right along with my love rather than be the one left behind.   Am I in or out?   That was followed by a long period of feeling like I had one foot in each world.   Am I in or out?   It took beyond the two year mark to feel planted back in this world, finally.  Am I in or out?  I am in!  With both feet, I Am In! 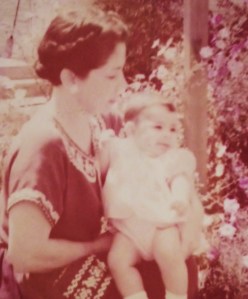 Mama said there’d be days like this, or so the saying goes.  Actually, she didn’t.  Rather, her gift to me was her mantra that the only constant is change.  Her world was one marriage, one home for decades, and the time and love to sew my clothes, plant her garden, and cook our meals from scratch.   A world pre-digital revolution and corporate-speak about change management.  How could she have known?

Sometime in college I decided that the best thing to be was not a doctor, lawyer, or chief.  I decided the best thing to be is resilient.  My world was made of the American baby boomer expectation that we could run faster and jump higher, and that we would meet and exceed our parents’ lives.  How could I have known just how much resilience I’d need?

These truths, these lessons, whatever they may be for each of us, are they in there somewhere being stored like acorns for the winter in which we’ll need them?  Today that seems likely to me.  And if I can believe that, if I can buy into the idea that the seeds of nurture and sustenance have been planted,  then I can accept that another saying, ‘you have everything you need,’ will bear out to be true as I set out again, seeking anew.

I suspect none but my Susannah Conway cohorts will be looking here yet so I’m addressing this  to you.  Welcome to my BWTW – that’s Blog with Training Wheels.  Here I’ll learn and practice with you all while I’m still wet behind the ears.  Looking forward to the journey!

"...We seek anew, enriched by pain...the perpetual impulse forward always falls back again to gather new strength. The fall is brutal, but we set out again." Albert Camus